The First Ever Image of a Black Hole 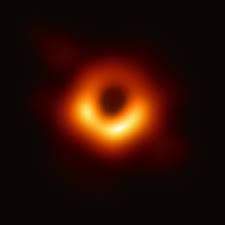 History was made this week with the breakthrough image of a black hole – the first image of its kind.  Behind the success of this breakthrough is 29-year -old Dr. Katie Bouman.

Over a period of 3 years, Katie, soon to be an assistant Professor at the California Institute of Technology, led her team in the development of multiple algorithms that would help create the first image of a black hole.

She then became a postdoctoral fellow on the Event Horizon Telescope Imaging team at Harvard University where she began work on capturing the first image of a black hole.

The supermassive black hole in question lies in the centre of the Messier 87 galaxy (abbreviated to M87) and is in the Virgo constellation. It is 53 million lightyears from Earth.

Data was gathered from a network of radio telescopes called The Event Horizon Telescope Array located at different points around the world. It is comprised of 8 different radio telescope facilities and they all work together as one to create higher resolution images of objects in space.

The method that Dr. Bouman used to process the data proved to be influential in creating the image. The algorithms were given multiple “assumptions” and they would then attempt to recover a photo from the data.  This was a key piece of the puzzle in creating the black hole image.

To give you an idea of the magnitude of this project, the data collected was saved on hundreds of hard drives which were then flown to the US and Germany for processing.  Four separate teams, including astronomers, engineers, mathematicians and physicists, helped to process the hard drive data.

The enormous complexity it took to capture this small image of a black hole is mind-boggling, but not daunting enough to stop the young Dr. Bouman from persevering.