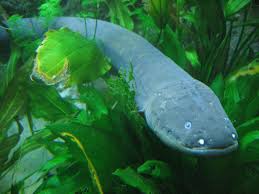 Did you know that electric eels can generate up to 600 volts of power using their muscle cells?  That’s enough to stun and incapacitate a human or even a horse.  Alessandro Volta was inspired by electric eels when he created the first synthetic battery in 1799. It consisted of a tall stack of zinc and copper discs, separated by salt-soaked cardboard.  He became a 19th-century celebrity for his invention.

An electric organ, which makes up 80 percent of an eel’s two-meter length, is what generates electricity.  Thousands of electrocytes, which are specialized muscle cells, make up this organ.  Even though each cell produces only a small voltage, together they can generate up to 600 volts.

The eel’s unique design has once again inspired scientists, this time from the University of Fribourg in Switzerland.  They have developed a gel-based soft battery that mimics the eel’s electric organ. Since this soft battery can be made from materials that our bodies would find compatible, the potential for use in medical implants is a real possibility.  It could potentially power pacemakers, prosthetics and medical implants.  It might even be possible to fuel these batteries by the human body’s own mixture of salt and other fluids.

You can read more on this story here.

The next time you see an eel (presumably at an aquarium), think about how important they have been to the development of our modern-day and future generation of batteries!