Debating a Computer – The Power of AI 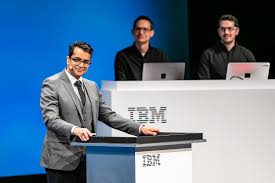 Have you ever wondered if it would be possible to have an argument with Artificial Intelligence?

IBM’s Project Debater has taken a step in this direction by building the company’s first artificial intelligence computer capable of having a meaningful debate with a human. The project initially began in 2012 and the first public debate took place this year.

Harish Natarajan, a debate champion, went up against this system and ultimately won, but the AI system was able to stay in the running by formulating increasingly complex arguments.

The interaction began with Project Debater greeting Harish before the argument:

“Greetings, Harish. I have heard you hold the world record in debate competition wins against humans. But I suspect you have never debated a machine. Welcome to the future,” it said, in a monotonous female voice.

The system is not connected to the Internet but is loaded up with magazine and newspaper articles on it’s own database. It listens to its opponent and creates its own rebuttal using those stored articles along with taking information in from the human debater.

Harish and Project Debater each delivered opening arguments, 4 minutes in length and gave a rebuttal to each argument along with a 2 minute closing statement. Project Debater drew information from its database to form the arguments.

Even though the AI had access to magazine articles and studies about its debate topic, (whether or not pre-school should be subsidized with Project Debater arguing in favour of it) it wasn’t able to make a proper rebuttal to Harish’s opening argument; rather it continued it’s initial argument after Harish pointed out specific flaws in the potential subsidies.

AI technology, while not technically new, is getting increasingly more complex and we’re only beginning to see its potential. The technololgy we’re used to now can only answer specific questions like, ‘What’s the weather like today?’.  This project shows that AI may not only be capable of answering specific questions but of having discussions.

The boundary of this technology is being pushed every day leading to increased interaction with people which will help AI understand us better.  Eventually, artificial intelligence like Project Debater may be able to see beyond a human’s scope of a problem and help us solve complex topics. The possibilities are endless.