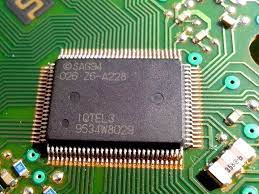 As the world continues to struggle with the ongoing pandemic, another predicament that has seen no relief is the computer chip shortage. The chips that power our smartphones, laptops, and a very long list of other electronic devices like cars and appliances, continue to be in high demand.  There simply aren’t enough to meet the needs of the global market. The shortage is being felt by everyone from major tech companies to small businesses and consumers.

The computer chip shortage is the result of a perfect storm of factors. The pandemic caused a surge in demand for laptops, tablets and webcams as people needed to work from home and attend school online.

Some tech firms started stockpiling chips, creating a scarcity for other manufactures.  At the same time, chip factories have been forced to shutter due to lock-down measures.

Weather has also been a problem.  Last winter, a storm caused semiconductor factories in Texas to shut down and a drought in Taiwan disrupted the supply of the raw materials used to make chips.

Then there’s bad luck, like a fire in a manufacturing plant in Japan that was a delaying factor.  Add to that skyrocketing shipping costs and the list goes on.

The Effect on Businesses

As the global semiconductor shortage continues, more and more companies are being forced to grapple with the implications.

One of the most high-profile examples is Tesla. The electric carmaker has been forced to halt production of its Model 3 sedan at its factory in Fremont, California due to a lack of chips. This is a major blow for Tesla, which had been hoping to ramp up production of the Model 3 to meet soaring demand. The company is now working on a plan to source chips from other suppliers, but it remains to be seen how long that will take.

Other automakers are also feeling the squeeze. Honda, for instance, has had to cut production of several models due to the chip shortage. Toyota, meanwhile, has warned that the shortage could impact its earnings. The Japanese automaker is currently working on contingency plans to mitigate the impact.

The chip shortage is also hitting the consumer electronics industry. Sony, for one, has warned that the shortage could impact the production of its PlayStation 5 console. The company is reportedly scrambling to secure enough chips to meet demand.

When Will it End?

According to senior executives at Intel and IBM, we could be dealing with this computer chip shortage for another two years.  Chip manufacturers are working to increase capacity, but this is not something that can be accomplished quickly. It costs billions of dollars to build semiconductor factories and they require well-trained workers.

In the meantime, we can expect to see higher prices for electronic devices and longer wait times.  If you’re looking for tech products this Christmas, best to get your order in soon.

BSC Solutions Group supplies and installs a wide range of computer network equipment. We have definitely seen delays in shipments of Servers, network switches and WiFi equipment in particular, so plan ahead if you are in need of any equipment replacements in the coming months.